Becoming A Leader for Your Puppy

Pack animals live in family packs which have a pack leader and lower ranking pack members. Dog packs, like wolf packs, are not a democracy.

A pack is organized in a hierarchy of rank. Simply put, this means that every member of the pack knows exactly what its rank is within the family pack including a puppy.

Pack animals genetically understand this concept. This concept is the reason people have dog fights when they add a new puppy to a home that already has dogs. Everyone has to re-establish the new pecking order when a new pack member comes on board. 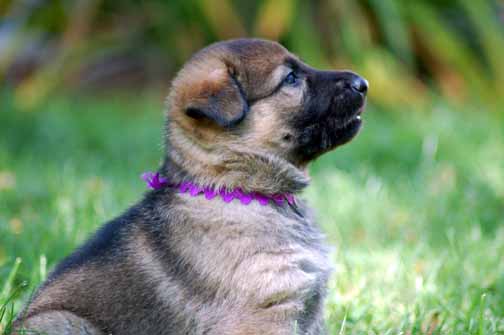 The Beginning of Pack Structure

When a puppy is raised with littermates they begin to establish their family pack at about 4 ½ weeks of age. They start by playing with one another.

They bite and push each other around. Those pups that bite the hardest and push the most become the higher ranking pack members of the litter.

With that said, there is no question that the mother is the pack leader. A good mother will exert her leadership by warning puppies to stay away from her food bowl when she is eating. She protects her litter which demonstrates leadership and she also controls the litter in subtle ways that establish her as the pack leader.

What is a pack leader?

When people get puppies they need to establish themselves as the new pack leader. To do this correctly they should first understand exactly what a pack leader is.

Pack leaders are aloof, they are calm, and they are self confident. A pack leader is fair in how he lives with pack members. While the pack leader is a dictator, he is a fair dictator who enforces a well defined set of rules that members know, understand and are expected to live by.

What a pack leader is not, is a dictator who loses his temper, bullies pack members into compliance, and does not act in a fair manner in regard to the lives of pack members.

People who put food down and then take it away or push the dogs away from the food bowl are bullies. This is how their dogs view them. This is not practicing fair leadership principles.

The correct way is to make the dog do something (i.e. sit) before the food is put down. But once it’s down they leave it alone until it’s time to pick it up. We leave food down for 15 minutes and then pick it up, even if the dog has not eaten it all.

It’s easy to bully your way into a leadership position. People (mostly men) do this all the time. The problem is that the bullying destroys their relationship with their dogs.

I want my pack members to trust me, feel relaxed around me, and be comfortable in my presence. The only way this can happen is if they know the rules and anticipate our expectations. When that happens they know they will be treated fairly. They also know that if they ignore the rules they will suffer the consequences.

Puppies who grew up and became dominant and aggressive dogs were always raised by people who did not establish the correct family pack structure.

Where does it start?

When a new puppy comes to your home its only experience in life has been with its mother and littermates. It sees that things have changed, but it has no reason to believe that how it interacts with a family pack has changed.

The new puppy has played with littermates by biting and chasing, so that’s how it thinks it should continue to interact within a family pack.

Often it takes a few days but once it accepts you and your family as its new pack, it will try to interact with you the same way it did with littermates…by biting and chasing.

The fact is, in its own small way it’s trying to find its rank within the new pecking order of your family.

It’s your job to teach your puppy (without scaring it) that you are the new pack leader. It’s your job to teach it that biting and chasing high ranking human pack members is unacceptable. Therein lies the rub. Many people ignore these small challenges and others overreact to them. You have to find the middle road.

Our first goal is to reduce the possibility of house training mistakes and to teach the pup that being wild in the house is not going to happen.

So in the beginning most of our interaction with a new pup is done outside. We use a flat collar with a snap and one of the 20 foot cotton lines we have. When the pup runs around we let it drag the line.

While this is not a house training article, I want to make the point that teaching a dog to pee or poop when it’s on a line is a very smart thing to do. You will find out how smart if you ever have to travel with your dog.

When we are tired of dealing with the pup it goes into its crate. In the beginning it’s going to scream like a banshee for a few days, but such is life. We will put the pup in a crate somewhere out of hearing reach.

As time passes and the pup calms down and learns manners in the house, I may let it lie at my feet when I work on my computer. If it doesn’t calm down it stays in the crate or I utilize place training.

When people get puppies with a lot of prey drive they are often at a loss as to what to do to control the little alligator they now live with.

The simple answer is to redirect the puppy into a toy.

As I explained earlier, puppies play by using their mouth. They see littermates as prey objects. When they come into your home and start chewing on you, they see you as a prey item. Your job is to teach them that toys are now prey items and not your hands, arms and legs.

Going through doors, going through gates, and coming down stairs first are a huge things in terms of rank for a dog. All dogs, puppies or adults, get excited when it’s time to be let out or time to come back in the house. Without training they will all bolt out the door. This is not only annoying, it can be dangerous.

From day one we control the pups at the door. They are always on a line and we always make the pup sit for food when we go outside or come back inside. In fact, we even make the dog sit when we step outside before we close the door.

Establishing a routine at the door again enforces your rank and control over the dog. Don’t underestimate the importance of this.

There is no question that people quickly fall in love with their puppies. Many buy their pets toys. I recently saw a reality TV show in which a women spent over $100 a week buying her dog new toys. Boy, do I wish I could send her a catalog…

With this said, we don’t leave toys lying around our home. We take the approach that the dog does not own any toys. The toys are our toys and we allow the pup to play with “OUR TOYS.” But we always take the toys away when the play time is finished.

Once again this demonstrates leadership without pressure. It’s not domineering but it makes it clear that you are the leader.

When we play with pups we always have it wear a line. This does two things. It stops them from playing keep away, and it conditions them to forget that they have a line on.

Taking the Toy Away From a Puppy

After play, when it comes time to take the toy away we say “OUT” (any word will do as long as we are consistent and stick with the same word) and offer to trade the pup a really good treat for the toy.

We simply let them smell the treat and when they spit out the toy they get the food. If we want the game to end we do a slight of hand to get the toy out of the picture and make it disappear. We don’t tease them with the toy once we take it away. That’s poor leadership and is counter productive to a good bond.

Trading food for toys is only going to last so long. Many dogs will start to look at you like “OH NO – I KNOW THAT TRICK – I STILL WANT TO PLAY.”

When that happens we change our approach and move on to the second stage of teaching the dog to release when told. That training is beyond the scope of this article but it’s covered in “Building Drive and Focus.”

Other Dogs and Puppies

If we are raising two pups at the same time we never allow them to play together. We want our pups to look at us as their source of fun and excitement and not another dog.

There are situations that happen all the time in which people who have serious behavioral problems because they mistakenly bought two pups which are now 12 to 24 months old. These dogs are now anti-social and are more difficult to train. Many have aggression problems.

If we are out for a walk and are approached by another person walking their dog we don’t allow the other dog to come up and smell or greet our puppy. This cannot be stressed enough.

We don’t know how territorial or dog aggressive this other dog is. It only takes a blink of an eye for another dog to strike our puppy. Once a puppy has been attacked, it will be dog aggressive for the rest of its life. Dogs don’t forget traumatic events like this.

As the pack leader our puppy EXPECTS us to protect it from non-pack members. If we are out for a walk and a stray dog tries to approach our puppy we put ourselves between the pup and the off leash dog. We drive the stray away. If we walk in an area that we know there are stray dogs we will carry pepper gas or a stout walking stick and we don’t hesitate to use them if the stray does not heed our verbal warning.