Dog Aggression and How to Handle It

Dealing with dog behavioral issues is never easy, but having an aggressive dog is particularly hard.

It frequently passes the point of simply being worried about coming home to a wrecked living room or having an overly vocal pup. You’re constantly worrying if your dog will attack someone – whether it’s another pet or a stranger, and it can be nerve-racking.

But, even though it’s undoubtedly a major problem, aggression in dogs can be corrected. Understand that some may be fixed quite easily and others may be more difficult but the key is finding someone to help solve these issues as you do not want to make issues worse.

What Is Dog Aggression?

When someone says their dog is aggressive, the first thing that comes to mind is that they have a dog that bites, but aggression can mean a lot of different things. Some canines keep their aggression toned down and never act out more than the occasional growl, while others can attack other dogs or even people.

Whatever the signs of aggression your dog displays, the most important thing is to understand what triggers the behavior. There are many different reasons why a dog might be aggressive and knowing what the underlying cause is will make treatment easier and more efficient.

Signs of Aggression in Dogs

How can you tell if a dog is nervous to the point of being aggressive? What kind of body language and signs is a precursor to an attack? Knowing the answer to these questions can help you anticipate aggressive behavior, and, hopefully, stop it in time. These signs can be identified through paying attention and acting on the behavior quickly.

Causes: Why Is My Dog Aggressive?

To be able to truly understand how to stop dog aggression, you’ll need to find out what makes your dog aggressive in the first place.

It’s very rare for a dog to become violent out of nowhere. Most often, the main culprit is a lack of proper socialization and training, but there are other causes that can contribute to this issue. Here are the most common causes of dog aggression: 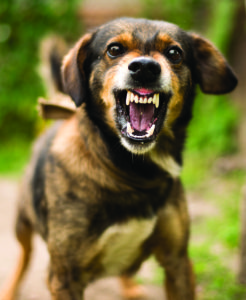 Food or object aggression in dogs

Aggression in dogs can be a complex issue. There is no “easy fix” or an overnight solution that will turn your pup into a well-behaved canine. However, with the right approach and patience, you can learn how to stop dog aggression in its tracks.

As is usually the case with all behavioral issues, prevention is the key. Every dog is looking for a leader and a leader’s purpose is to provide structure and guidance. Domesticated animals are the only animals that do not have to hunt for food or fight for survival daily. This does not omit the fact they still have the natural instinct intact. Ensure you clearly communicate and identify what behaviors are accepted and those that are not.  Establishing boundaries is the first step in addressing any behavioral issues.

These are some tried and true tips that can help prevent the development of aggression in dogs:

If you believe you have a dog with any of these aggression issues, I would suggest contacting an experienced trainer. Although there are a multitude of ways to address aggression issues, it is best to get help from someone able to identify and handle the situation efficiently. In some cases, while attempting to rectify an issue, matters could be made worse if the wrong solution is attempted.

Here at Total Dog Training, we have a wealth of experience in handling various types of aggression issues and have rehabilitated many pups so they can live their best lives. Check out our testimonial and give us a call today!!!!