Dog Parks: What You Need To Know

Every morning, rain or shine people stand around making conversation with strangers as their dogs chase, run and mingle.

Dog parks are among the fastest growing park amenities nationwide. The Trust for Public Land found that there has been a 40 percent increase in the development of dog parks since 2009.

The first dog park in the United States was the Ohlone Dog Park, which was founded by Martha Scott Benedict and Doris Richards in 1979 in Berkeley, Calif.

Since then, dog parks have become standard amenities in developing city and suburban neighborhoods across the country, but are they actually good for dogs?

According to a survey conducted by the National Recreation and Park Association (N.R.P.A.), 91 percent of Americans believe dog parks provide benefits to their communities.

This was especially true among millennials and Gen Xers, who overwhelmingly recognized dog parks as beneficial amenities.

The study found that the top two reasons responders cited for supporting dog parks were that 60 percent thought that they gave dogs a safe space to exercise and roam freely, and 48 percent felt that dog parks were important because they allowed dogs to socialize.

Especially for urban dogs that don’t have backyards to exercise in, dog parks can sound like a great idea.

There is nothing natural about dogs that aren’t familiar with one another to be put in large groups and expected to play together.

Many of us just accept the assumption that dog parks are good places to socialize a dog, but that’s not the case.

In terms of canine behavior, the term “socialization” isn’t just dogs interacting or “socializing” with other dogs, but rather, “the process of exposing young puppies under 20 weeks to new experiences.”

“This helps them have more confidence and adapt to new situations.”.

Though socialization is critical for the healthy development of puppies, the dog park is not where you want to bring your puppy to learn about appropriate interactions with other dogs.

Dog parks are not a safe place to socialize a puppy under 6-12 months old,”

“During our puppy’s early months, they are more sensitive to experiences, so a rambunctious greeter at the park may be enough to cause our puppy to be uncertain of all dogs,”.

The goal for socializing young puppies is to ensure they have only positive interactions, and to avoid any overwhelming or frightening interactions.

Socialization with older dogs is a bit more challenging, because in a behavioral sense, older dogs have already had all of their formative socialization experiences. Dog guardians generally mean well when they bring a shy dog to the dog park with the intention of giving that dog positive interactions with other dogs. Unfortunately, this can backfire. A dog who is nervous or uncomfortable is more likely to be easily overwhelmed in a park setting, which leads to dog fights or a long-term fear of encountering other dogs.

A park setting also allows dogs to pick up bad habits, and is not a place you want to bring a dog who is under-socialized.

Although dogs are social animals and regularly engage in various forms of play, the artificial setup of a dog park can be challenging.

Many people bring their dogs to the park to burn off excess energy, but these dogs often display over-aroused behavior that can trigger issues.

Unfortunately, just because an owner thinks their dog plays well with others, doesn’t mean they always do.”

Having your dog in a dog park requires trusting that everyone in the park is monitoring their dog.

That’s a lot of trust to put in a stranger.

Unlike doggy day cares or play groups, most dog parks are public spaces that are not screened or supervised.

This can be an issue where fights between dogs can lead to dogs learning inappropriate behaviors from other dogs. Bad experiences can also ripple outward and cause our dogs to have issues or concerns outside of the dog park.

Dogs at dog parks might pick up bad habits such as being pushy or engaging in play with others. 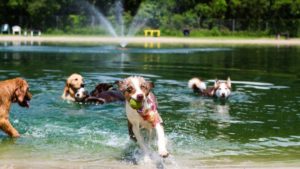 Dogs that are overwhelmed by the boisterousness of others may become withdrawn, skittish and nervous when meeting other dogs.

One of the biggest dangers of dog parks is that they often don’t have separate play enclosures for large and small dogs. Often times when they do, owners can choose to disregard those spaces.

Even without meaning to, a large dog can easily cause serious injury or even kill a smaller dog.

From minor scuffles to serious incidents, injuries are common at dog parks.

Bite wounds are common, even from rough play.

Bites that occur in fights or during play often involve tearing under the skin. Muscle strains and sprains from lunging and rough play are also common.

Anytime dogs quickly pivot on their back legs, they are also at risk for tearing the ligaments.

Dog parks are primarily unregulated and no proof of is actually required even with posted signs.

The American Animal Hospital Association advises owners to have their dogs vaccinated with the Bordetella vaccine. This prevents “kennel cough,” as well as distemper.

You’ll also want to have your dog vaccinated against leptospirosis, this is spread through communal and natural water sources.

All dogs should be vaccinated against rabies. Dogs that visit dog parks should be on flea and tick prevention as well as year-round heartworm prevention.

Dogs that visit dog parks should also be vaccinated against canine influenza (dog flu) for prevention.

Most dog owners aren’t skilled at reading their dog’s body language beyond a wagging tail. Warning signs that your dog is uncomfortable, unhappy or angry are often ignored.

This leads to minor and major dog fights. Understanding canine body language is key to supporting your dog’s comfort and safety. This also includes assessing if a playgroup at the dog park is going to be a good match.

“The dog park is not a place for you to let your dog run unsupervised while you socialize with other people,”.

“Keep an eye on your dog and make sure that they are both being good and having a good time.”

This means watching the actions and behaviors of your dog and the other dogs in the park.

If things are getting too intense, that’s a good time to leave.

What Should You Be Looking For?

Subtle signs of fear or aggression include “lip licking, yawning or panting when not hot.”

Other signs of discomfort or a brewing issue include stiff bodies and erect tails. Keeping an eye out for these signs can help you to intervene before an interaction escalates.

Even dogs that appear to be playing well together may be at risk.

“Healthy play between dogs should include small breaks or pauses,”

“When ensuring all dogs are happy, I recommend stopping the dog who may be too over-the-top and seeing what the other dog does.

Any kind of behavior that involve one dog pinning another dog is also one to avoid. Barking, growling and other occasional vocalization during play is normal, but frenzied barking is generally too much.

On a good day, if the dog park you visit is large enough, it may physically tire out your dog.

But the visit won’t actually provide your dog with the kind of enriching mental and emotional stimulation that dogs need. Dog parks, unfortunately, are often more about humans than they are about dogs.

As much as humans enjoy socializing with other animal lovers while dogs play, it’s far safer to skip the dog park.

A better option is to spend that time engaging by going on walks or enrolling in training.

Ultimately you’re the only one who can determine if the risks outweigh the benefits of dog parks. But there is no shame in not surrendering your dog to what has become the quintessential urban dog experience.

Make the time you have with your dog meaningful and enriching; after all, your dog wants to spend time with you, too.